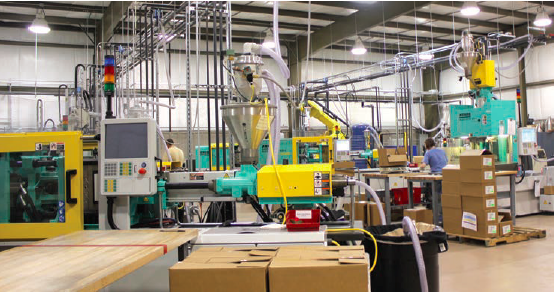 Steve Shoemaker previously was sole owner and sole employee of a small plastics company in Comstock. He performed all of the tasks himself to run the company and turn out product. He was so good at it, his partners said, that he outgrew his 2,000-square-foot factory as he struggled being a one man band. He looked for larger quarters, and help.

Two long-time friends answered the call. Kevin Murphy, Steve’s next door neighbor and a natural-born salesman, found a place with Shoemaker. Murphy joined the company when it made the move to Vicksburg and purchased an empty building in the industrial park. The business has grown from two customers to 14 today with more orders in the pipeline.

“We are not a one-man factory anymore,” Shoemaker pointed out as he walked through the current plant. “We have grown from just me to 17 employees, eight injection molding machines, serving the automotive industry–seals, gaskets, seating and roofing components. We have also established a strong partnership with a supplier who has developed a line of plant based biodegradable resins. MCM has developed an expertise in processing this material and has worked to take several products to market with its customers,” he said.

Kevin Murphy, points out the company’s biggest claim to excellence in a crowded marketplace is the ability and the practice of perfecting the injection molding process and tooling to the point that the process can be monitored by machine alarms. The machine automation can then reject suspect product without human intervention.

“As a result we ship high quality products that are consumed regionally and as far away as China. Our process is refined and our facilities are clean and modern. Most of all, we are hungry and driven by the goal of getting to $3 million [in sales] by the end of 2015, and eventually $20 million. We can do it and we are very excited,” the partners said as they echoed each other.

The owners say they have found a highly skilled workforce in the area. They also acknowledged the injection molding companies in the region which pioneered the process and created the pool of workers. They include the Haas family in Mendon, Portage and Vicksburg, George Laure with WL Molding in Portage, and the Stewarts in Vicksburg with Triple S.

“Southwest Michigan First’s Joe Agostinelli, helped us immensely,” Shoemaker said. “Once we got to Vicksburg, Ken Schippers, the village manager, has been on site each week to find out what we need and how he can be of help. We are running three shifts now, five days a week and could go to seven [days] with the expansion. The village has helped us streamline the process of expansion, so we can grow the business. They have done a great job for us.

” MCM will be ‘lights out’ (full speed ahead) with our automation, motivation, and competitiveness, the owners say. They invite anyone to come visit their facility for a tour of the plant and to share in their pride in the plant and the workers. Miniature Custom Manufacturing Grows in Vicksburg.